Home • Updates • Boris Johnson is unveiling a ten-point, £12billion plan for the environment!

Boris Johnson is unveiling a ten-point, £12billion plan for the environment!

‘Driving will become a privilege for the wealthy’: Warning PM’s decision to ban petrol and diesel cars by 2030 as part of green push will punish motorists who can’t afford electric cars – and leave a £40BILLION black hole in tax revenues

Motorists were today warned that road pricing is inevitable and driving could become a ‘privilege for the wealthy’ after Boris Johnson announced a ban on sales of new petrol and diesel cars from 2030.

The PM is facing a backlash after he unveiled a new environment plan, including introducing the curbs a decade earlier than originally planned.

Mr Johnson is heralding a ‘green industrial revolution’ as he launches a ten-point, £12billion plan for the environment, saying it could create 250,000 jobs and slash the country’s carbon emissions.

It includes further investment in nuclear power, wind energy, domestic heating and cutting-edge technology such as carbon capture and storage.

However, with electric vehicles costing far more than conventional models, there are fears the push will hit the poor. Car firms have warned that moving too quickly risks ‘pricing those who most need it out of personal mobility’.

Meanwhile, a leading economist cautioned that the switch will put £40billion in road taxes at risk because electric vehicles are exempt.

‘Some form of road pricing will be needed,’ said Paul Johnson of the Institute for Fiscal Studies.

‘The Government needs to get started now – it will be very hard to introduce after people have got used to no tax.’

Nicholas Lyes of the RAC warned that many motorists would be nervous about the switch to electric cars, given their limited driving range and charging problems.

Urging ministers to revive discount schemes for buyers, he said the biggest barrier by far was the high upfront cost.

The push for electric vehicles will come with a £1.3billion investment in charging points in homes, streets and trunk roads.

Among the moves being announced today are:

The UK has a legal target to cut greenhouse gases to net zero by 2050, requiring huge cuts to emissions and any remaining pollution from sectors such as aviation needs to be ‘offset’ by measures such as planting trees.

There is also pressure to set out ambitious action to tackle the climate crisis because Britain is to host a United Nations environment summit which was delayed by the pandemic and is now taking place in Glasgow in November 2021.

The Prime Minister has a longstanding passion for green issues and has been encouraged to push the Government further in that direction by his fiancee Carrie Symonds, who works as an environmental campaigner.

Mr Johnson, who drove a 15-year-old diesel car before entering government, said: ‘Although this year has taken a very different path to the one we expected, I haven’t lost sight of our ambitious plans to level up across the country.

‘My ten-point plan will create, support and protect hundreds of thousands of green jobs, whilst making strides towards net zero by 2050.

‘Our green industrial revolution will be powered by the wind turbines of Scotland and the North East, propelled by the electric vehicles made in the Midlands and advanced by the latest technologies developed in Wales, so we can look ahead to a more prosperous, greener future.’

The plan brings the ban on new conventional cars and vans forward by a decade, from a planned date of 2040.

The sale of some hybrid vehicles will be allowed until 2035.

Government sources stressed last night that motorists would still be able to drive older conventional cars after this point, although the motor industry has raised concerns about the potential impact on the secondhand vehicle market.

Nearly £500million will be spent in the next four years on the development and mass-scale production of electric vehicle batteries, helping to boost manufacturing bases, including in the Midlands and North East.

The Government will also launch a consultation on the phasing-out of new diesel HGVs to clean up freight transport, though no date has been set.

‘An approach that relies only on expensive electric cars risks turning driving into a privilege only afforded to the wealthy, while pricing those who most need it out of personal mobility,’ he said. 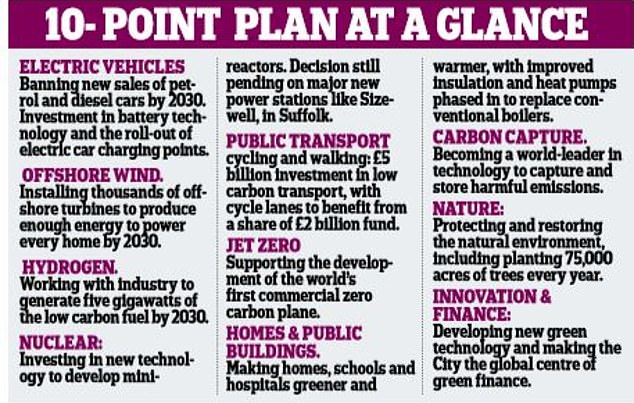 The UK aims to become a ‘net-zero’ nation by 2050 and OZEV (Office for Zero-Emission Vehicles) is providing electric...

As an owner, you are required by law to adhere to the necessary electrical safety regulations as set out in...