A great Article by Jasper Jolly in the Guardian showing the EV Charger numbers across the regions.

London and the south-east received 45% of new charger capacity in the past year, analysis shows.

London and the south-east have benefited disproportionately from the installation of new electric car charge points in the last year, amid a push to be ready the UK for the ban on internal combustion engine cars in 2030.

The two regions together received 45% of new charger capacity in the year to October, well in excess of their 27% share of the population, according to a Guardian analysis of Zap Map data which shows charging points across the UK published by the Department for Transport.

Every other region received a lower proportion of new charge points installed during the year to October than their population would suggest.

Public car-charging infrastructure was a key part of Boris Johnson’s plans for a “green industrial revolution” published last week. Johnson’s 10-point plan included £1.3bn of investment in car charging, although only £800m of that was new spending. Further details are expected to be outlined in the chancellor’s one-year spending review this week.

The 2030 ban means that all new car buyers across the UK within a decade will need easy access to charging infrastructure, but the current public charging network is already skewed towards London in particular.

There are 63 public chargers per 100,000 people in the capital, more than double the average of the rest of the UK, according to the data compiled by Zap Map. Northern Ireland had the lowest, with only 16.8 per 100,000 people – although other regions with a lower proportion of urban residents may be able to depend more on charging at home in off-street parking spaces.

“What we need is government incentives to put these charge points in place … to provide the incentive for consumers to follow,” he said.

The total number of publicly accessible chargers last month passed 20,000, but there are still 46 local authority areas with fewer than 10 public charging points per 100,000 residents, demonstrating the scale of the challenge ahead to make the whole country ready for electric cars. The RAC has reported a doubling this year in the number of instances where drivers of electric vehicles have needed assistance after running out of charge, because charge points have been out of service, their home chargers have failed to charge overnight, or drivers have run out of charge before reaching a charge point. 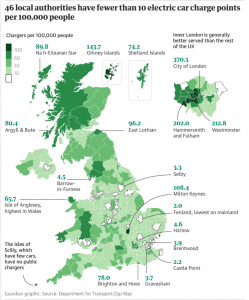 Ben Nelmes, head of policy at thinktank New AutoMotive, said: “The transition to electric cars has the potential to contribute to the government’s levelling-up agenda because electric cars are much cheaper to run. Access to a local and reliable public charging network is essential for the one-third of people who do not have access to off-street parking.

“Public funding for charge points should be spent where it is most needed and will provide most benefit to motorists, but cash-strapped local councils often struggle to get the data they need to bid for charge-point funding from the Department for Transport.”

Analysis commissioned by the Society of Motor Manufacturers and Traders, the UK industry lobby group, suggested the UK would need to build more than 1.9m public charging points by 2030 – well over 500 per day. The bill is expected to be £16.7bn.

Mike Hawes, the SMMT’s chief executive, said government investment so far was “a step in the right direction” but still “only a fraction of the multi-billion pound investment required”.

“The industry invested £54bn in electrification across Europe last year,” Hawes said. “We need others to step up.”

Even before the 2030 ban was confirmed, the move to electric vehicles had triggered a race by private companies.

Chargemaster, bought by oil company BP in 2018, has the largest UK network. During 2020 it has built 31% more rapid chargers, which are vital for topping up on longer journeys, according to Zap Map. However, rivals such as Germany’s Ubitricity and energy provider EDF’s Pod Point are expanding their overall networks faster. No single provider has more than 13% of the market.

The confirmation of the 2030 ban will prompt an acceleration in investment in chargers, according to Nick Ballamy, managing director of EVC, which is planning to spend £150m to install 100,000 charge points over the next five years.

He said he was optimistic that the barriers could be overcome. “The reason the uptake [of electric cars] has been a lot slower is because the infrastructure is not in place,” he said. “People want to be able to buy their vehicles and know they can charge at their convenience.”

It is hard for Mr. Electric or any of the OLEV Accredited EV Charger Installers to help increase the number of Public Chargers, but we can install at home or work and please contact us for further information. 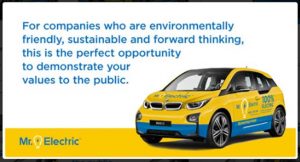 MANDATORY FIVE-YEAR ELECTRICAL SAFETY CHECK REGULATIONS TO BE ENFORCED IN ENGLAND: You may or may not be aware that the...